We received a PNG file that got somehow corrupted in transit. Reading the PNG specification and looking at the first couple of bytes in the header we saw that an 0x0d byte was dropped. The file used 89 50 4e 47 0a 1a 0a as header instead of 89 50 4e 47 0d 0a 1a 0a. According to the PNG specification this is a feature to detect if the file was converted from lf/cr to cr or cr to lf/cr. Now if that's not a huge hint.

Ignoring the hint we badgered on and continued reading the PNG documentation and playing around with the PNG after fixing the header. PNG files consist of multiple chunks of different types. Each chunk consists of length (4b, big endian), chunk type (4b), data (len), CRC-32 (4b). Writing a parser we saw that the first couple of chunks were decoded just fine but then there was a bunch of IDAT chunks (that contain a deflate-encoded stream of data) that did not match up. The data was somewhat too short (shorter than the length description) and the following IDATs did not line up. We tried both padding the data section with additional 0x0 bytes and shortening the data sections but then the CRC-32 did no longer match. After we fixed the CRC-32 we got a deflate decode error (in the first IDAT chunk). Whenever decoding fails in a chunk, PNG readers give up as they can no longer resynchronize.

Oh well, back to square one. Let's look again at that PNG linefeed conversion thingy. After looking more closely we discovered that each chunk hat 0 to 3 bytes missing. Hm, this looks suspiciously like a Windows to Linux text format conversion and might tell us that the file was converted in error. An earlier internet search told us that it is impossible to undo this conversion (that's why we tried the other options first) but if you try hard it might be possible to recover.

So, firing up our Python skills we wrote a quick tool that parsers the PNG file, fixes header and copies all correct chunks. For incorrect chunks we extract the data and recursively try to find correct placements of 0x0d bytes. We walk through the data section and for every 0x0a byte we find, we try to place an 0x0d byte before it until the length matches. We then test the CRC-32 and if the CRC-32 now matches with the CRC-32 in the file we have successfully recovered the data of this one chunk. This recovery option only works if there are not too many 0x0d bytes that were removed from a specific chunk, otherwise the search space would explode. Even with only a couple of chunks that had 3 bytes missing the search took roughly 15 minutes on a fast desktop (well, maybe we should not have coded the search in Python).

You can guess the remainder of the program (parsing the file format, then parsing each chunk, looking at the length and searching for the next chunk by guessing how many bytes are missing. In the end we received a nice Startcraft screenshot that told us the flag is flag{have_a_wonderful_starcrafts}. Hooray, 150 points! 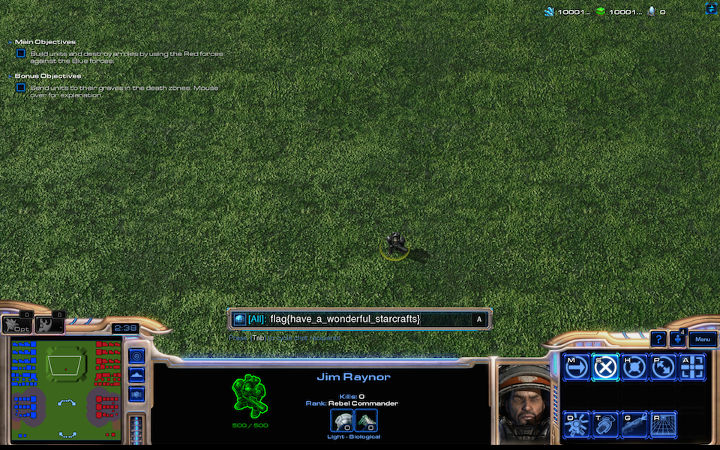