At a high level, Control-Flow Integrity (CFI) restricts the control-flow of an application to valid execution traces. CFI enforces this property by monitoring the program at runtime and comparing its state to a set of precomputed valid states. If an invalid state is detected, an alert is raised, usually terminating the application. As such, CFI belongs to the class of defenses that leverage runtime monitors to detect specific attack vectors (control-flow hijacks for CFI), and then flag exploit attempts at runtime. Other examples of runtime monitors include, e.g., ASan (Address Sanitizer, targeting spatial memory corruption), UBSan (Undefined Behavior Sanitizer, targeting undefined behavior in C/C++), or DangNull (targeting temporal memory corruption). Most of these monitors target development settings, detecting violations when testing the program. CFI, on the other hand, is an active defense mechanism and all modern compilers, e.g., GCC, LLVM, or Microsoft Visual Studio implement a form of CFI with low overhead but different security guarantees.

Since the initial idea for the [1] defense mechanism and the first (closed source) prototype were presented in 2005 a plethora of alternate CFI-style defenses were propose and implemented. While all these alternatives slightly change the underlying enforcement or analysis, they all try to implement the CFI policy. The goal of this blog post is neither to look at differences between individual CFI mechanisms as we did in [2] (see this paper for an exhaustive enumeration of related work in the area of CFI) nor to compare CFI against alternate mechanisms as we did in [3], but to explain what CFI is, what it can do, and what its limits are.

Any CFI mechanism consists of two abstract components: the (often static) analysis component that recovers the Control-Flow Graph (CFG) of the application (at different levels of precision) and the dynamic enforcement mechanism that restricts control flows according to the generated CFG.

Direct control-flow transfers are straight-forward to protect as, on most architectures, executable code is read-only and therefore the target cannot be modified by an attacker (even with arbitrary memory corruption as the write protection bit must first be disabled). These direct control-flow transfers are therefore protected through the read-only permission of individual memory pages and the protection is enforced (at no overhead) by the underlying hardware (the memory management unit). CFI assumes that executable code is read-only, otherwise an attacker could simply overwrite code and remove the runtime monitors.

A CFG is a graph that covers all valid executions of the program. Nodes in the graph are locations of control-flow transfers in the program and edges encode reachable targets. The CFG is an abstract concept and the different existing CFI mechanisms use different approaches to generate the underlying CFGs using both static and dynamic analysis, relying on either the binary or source code.

For forward edges, the CFG generation enumerates all possible targets, often leveraging information from the underlying source language. Switch statements in C/C++ are a good example as the different targets are statically known and the compiler can generate a fixed jump table and emit an indirect jump with a bound check to guarantee that the target used at runtime is one of the valid targets in the switch statement.

For indirect function calls through a function pointer, the underlying analysis becomes more complicated as the target may not be known a-priori. Common source-based analyses use a type-based approach and, looking at the function prototype of the function pointer that is used, enumerate all matching functions. Different CFI mechanisms use different forms of type equality, e.g., any valid function, functions with the same arity (number of arguments), or functions with the same signature (arity and equivalence of argument types). At runtime, any function with matching signature is allowed.

Just looking at function prototypes likely yields several collisions where functions are reachable that may never be called in practice. The analysis therefore over-approximates the valid set of targets. In practice, the compiler can check which functions are address taken, i.e., there is a source line that generates the address of the function and stores it. The CFI mechanism may reduce the number of allowed targets by intersecting the sets of equal function prototypes and the set of address taken functions.

So far, the constructed CFG is stateless, i.e., the context of the execution is not considered and each control-flow transfer is independent of all others. On one hand, at runtime only one target is allowed for any possible transfer, namely the target address currently stored at the memory location of the code pointer. CFG construction, on the other hand, over-approximates the number of valid targets with different granularities, depending on the precision of the analysis. Some mechanisms take path constraints into consideration and check (for a limited depth) if the path taken through the application is feasible by using a dynamic analysis approach that validates the current execution. So far, only few mechanisms look at the path context as this incurs dynamic tracking costs at runtime.

CFI can be enforced at different levels. Sometimes the analysis phase (CFG construction) and enforcement phase even overlap, e.g., when considering path constraints. Most mechanisms have two fundamental mechanisms, one for forward-edge transfers and one for backward-edge transfers. 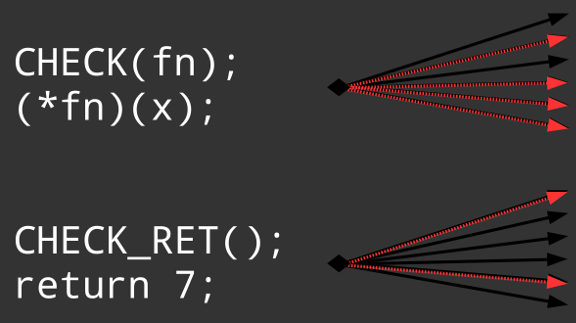 The figure shows how CFI restricts the set of possible target locations by executing a runtime monitor that validates the target according to the constructed set of allowed targets. If the observed target is not in that set, the program terminates.

For forward-edge transfers, the code is often instrumented with some form of equivalence check. The check ensures that the target observed at runtime is in the set of valid targets. This can be done through a full set check or a simple type comparison that, e.g., hashes function prototypes and checks if the hash for the current target equals the expected hash at the callsite. The hash for the function can be embedded inline in the function, before the function, or in an orthogonal metadata table.

Backward-edge transfers are harder to protect as, when using the same approach, the attacker may redirect the control-flow to any valid callsite when returning from a function. Strong backward-edge protections therefore leverage the context through the previously called functions on the stack. A mechanism that enforces stack integrity ensures that any backward-edge transfers can only return to the most recent prior caller. This property can be enforced by storing the prior call sites in a shadow stack or guaranteeing memory safety on the stack, i.e., if the return instructions cannot be modified then stack integrity trivially holds. Backward-edge control-flow enforcement is "easier" than forward-edge, as the function calls and returns form a symbiotic relationship that can be leveraged in the design of the defense, i.e., a function return always returns to the location of the previous call. Such a relationship does not exist for the forward-edge.

If implemented correctly, CFI is a strong defense mechanism that restricts the freedom of an attacker. Attackers may still corrupt memory and data-only attacks are still in scope. For the forward-edge, a strong mechanism must consider language-specific semantics to restrict the set of valid targets as much as possible. Additionally, most mechanisms for the forward-edge are stateless and allow an attacker to redirect control-flow to any valid location as identified by the CFG construction. Limiting the size of the target sets constrains the attacker on the forward edge. For the backward edge, a context-sensitive approach that enforces stack integrity guarantees full protection.